We are lucky enough to have a hawthorn tree growing in our front garden. Indeed, it was one of the reasons we decided to rent this house.

Our wee tree, from which we hang feeders for the birds, is resplendent in blossom at the moment.

Hawthorn blossom is also known as May blossom, and is symbolic of the festival of Beltane in contemporary Paganism and folk traditions. However, up in Scotland the hawthorn is rarely anywhere near flowering by 1st May (especially with the change from the Gregorian to Julian calendar!), and it is the marsh marigold that is known as lus buidhe Bealltainn, ‘yellow plant of Beltane’ in Gaelic lore. For me in Glasgow, when the hawthorn is flowering it means that spring is now resolutely early summer, and this year it also meant a chance to try dyeing wool with hawthorn blossom.

In Jenny Dean‘s Wild Colour (aka The Bible) she describes how to extract colour from both the blossom and the leaves, twigs and berries. In the autumn I attempted to dye with the berries alone, which resulted in a colour change that could generously be described as ‘pale oatmeal’ rather than the pinky tones pictured in the book, though I will try again with leaves AND twigs AND berries next autumn. I decided to try two dyebaths with the summer foliage: first the flowers along with the leaves, and the second the leaves and twigs of the younger branches that hadn’t flowered but needed cutting back anyway!

I used fibres that I had mordanted with alum and cream of tartar (using the method described on Dyeing Crafts) the day before.

I removed as much of the twigs as I could, leaving a total weight of 115g. 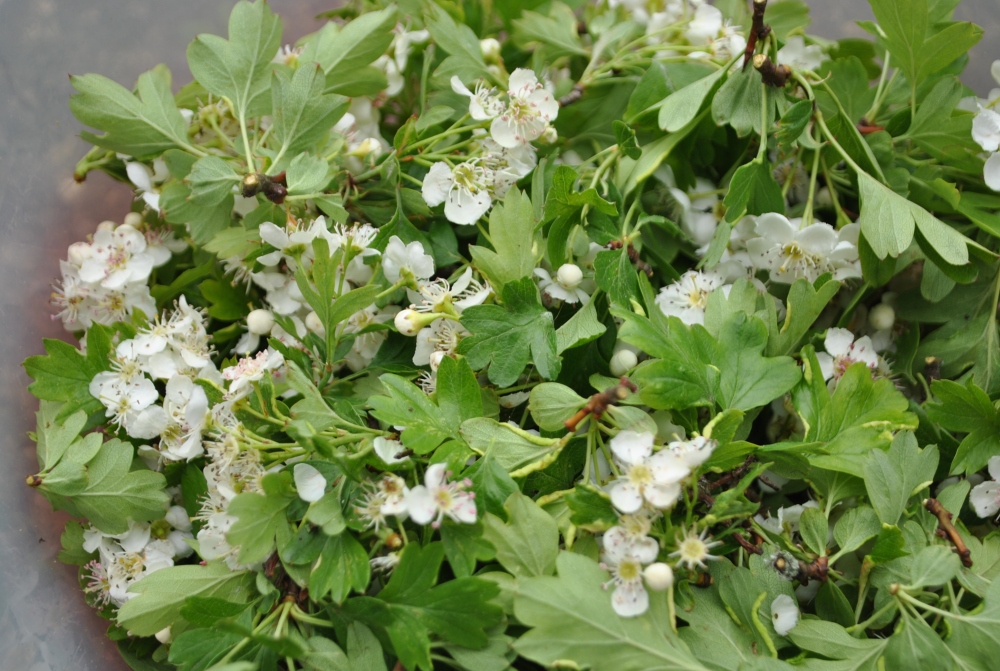 While sitting on the backdoor step chopping off the the twigs, I was visited by our local young team of starlings, looking for worms and insects amongst our rather unkempt back lawn. Once dog Rowan was out the way they didn’t seem perturbed by my quiet busy presence, and I watched the adults guide and feed the juveniles (one of which even graduated to stealing out of his parent’s beak!).

I also noticed the interesting-looking lichens in early stages on the twigs.

No doubt there’ll be posts about dyeing with lichens in future, but I wanted to give these tiny pioneers a chance to grow, so I left the bare twigs in the garden as a home for the beasties the starlings were enjoying so much.

I ended up with 115g of blossoms and leaves, which I soaked in boiling water for a day, then simmered at 80 deg C for a couple of hours, before soaking for another day, to extract as much colour as possible.

I then added 10g (dry weight) of alum-mordanted unspun Whitefaced Woodland wool, soaked for several hours before simmering at 75 deg C for a couple of hours. This was then left to cool and soaked overnight.

These young branches were removed more for the postman’s benefit than my dyeing adventures, but having cut them off I thought I should use them.

I may be fairly new to this natural dyeing lark, but I already know that with foraged plant materials, ‘if in doubt, expect yellow’. But I am also learning to appreciate the subtle differences in various shades of yellow, and was interested in the three rather different (albeit yellow) results I got here.

Left: Wool dyed with blossoms and leaves gave a nice lemony yellow, which while fairly pale is more vibrant than the photo shows.

Middle: Alpaca dyed with twigs and leaves is solidly oatmeal – in a number of experiments with other dyestuffs this particular roving (a gift from my mother-in-almost-law, who got it from a friend up in Aberdeenshire who keeps alpacas) doesn’t seem to take colour very strongly. I’m wondering whether that’s the nature of alpaca, or because of how it’s been processed.

Right: Although treated in exactly the same way as the alpaca, the wool dyed with twigs and leaves is a much stronger golden colour. There’s a considerable difference in yellow between the flowers+leaves and the leaves+twigs, and I am wondering if that’s because of the tannin in the twigs or the presence of the flowers.

Some time I will have to try dyeing exactly the same fibre with leaves only and leaves+twigs, which I want mind to much as there’s plenty of the dyestuff to hand and I rather liked the smell of it simmering in the kitchen!

and the Felty Folk

A blog about a love of colour, addiction to fabrics and joy of crafting...

Scotland with the Wee White Dug - A Scottish Travel Blog

A fun and informative Scottish travel blog showcasing the best of Scotland.

Damp and in the middle of nowhere

An Exploration of Mushroom and Lichen Dyes

The Snail of Happiness

small steps to a kinder world

what i do while the paint is drying: ongoing weaving/knitting/dye projects, experiments with local dye plants, garden trash and other messy endeavors.

Homegrown, hand-spun living in the city

A Verb for Keeping Warm - News

A vehicle for the imagination

Brigid, Fox, and Buddha: a personal homepage and blog